Anna-Maria Hefele is the furthest thing from a traditional singer, and now a video of her performance is going viral. Hefele can sing using polyphonic overtone techniques, also known as “throat singing.” She can sing two notes at the same time.

The video has been viewed more than 1.4 million times on YouTube thanks to a nod from Reddit, where users gave it more than 4,105 upvotes. Hefele tries to explain the technique in the video saying, “You can sing the overtone scale on one fundamental. Another fundamental has its own overtone scale, so in order to have more overtones to sing nice melodies, you can use different fundamentals and change them while singing.”

On her website, Xanmoo.com, she writes that she has been practicing this unique musical technique since 2005. Polyphonic overtone singing started in southwestern Mongolia, where it is known as sygyt.

I recommend listening to this with headphones – the overtone can seem to drop out at times, especially when played over tinny laptop speakers.

Overtone singing is also known as throat singing, of which there are several styles: 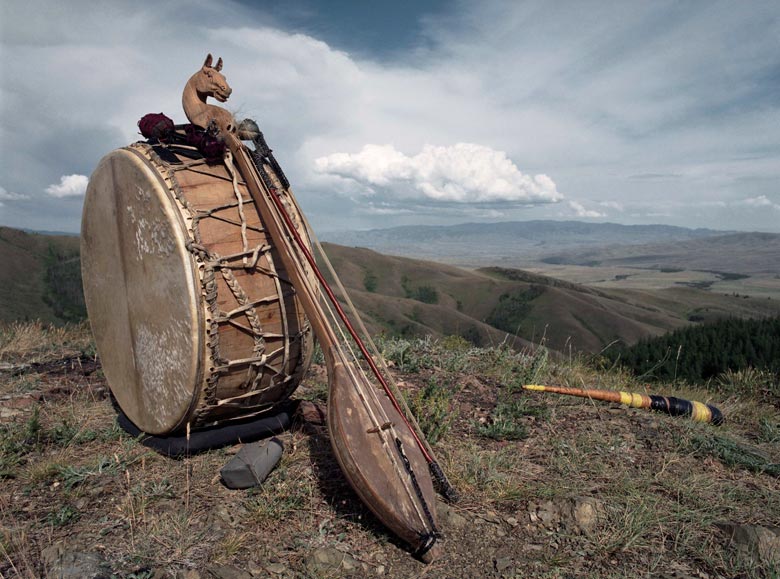 Khoomei, Hooliin Chor (in Mongolian, ‘throat harmony’), or Mongolian throat singing is one particular variant of overtone singing practiced by the Mongol people in Mongolia, Inner Mongolia, and Tuva. It’s inscribed in 2009 on the Representative List of the Intangible Cultural Heritage of Humanity of UNESCO, under the name “Mongolian art of singing, Khoomei”.[1]

The art of Mongolian throat singing is a style in which one or more pitches sound simultaneously over a fundamental pitch, producing a unique sound. The history of Mongolian throat singing reaches very far back. Many of the male herders can throat sing, but women are beginning to practice the technique as well. The popularity of throat singing among Mongolian seems to have arisen as a result of geographic location and culture. The open landscape of Mongolia allows for the sounds to carry a great distance. Ethnomusicologists studying throat singing in these areas mark khoomei as an integral part in the ancient pastoral animism that is still practiced today. Often, singers will travel far into the countryside looking for the right river, or will go up to the steppes of the mountainside to create the proper environment for throat-singing.[2]

The animistic world view of this region identifies the spirituality of objects in nature, not just in their shape or location, but in their sound as well.[3] Thus, human mimicry of nature’s sounds is seen as the root of throat singing. (An example is the Mongolian story of the waterfall above the Buyan Gol (Deer River), where mysterious harmonic sounds are said to have attracted deer to bask in the waters, and where it is said harmonic sounds were first revealed to people.)[citation needed] Indeed, the cultures in this part of Asia have developed many instruments and techniques to mimic the sounds of animals, wind, and water.[citation needed] While the cultures of this region share throat singing, their styles vary in breadth of development.

It is simply the harmonized sounds that they are able to produce from deep within their throats.[4] Ordinarily, melodies are created by isolating the 6th, 7th, 8th, 9th, 10th and 12th partial in accordance with the harmonic series (if fundamental frequency were C3, the overtones would be: G5, B♭5, C6, D6, E6, G6), though it is possible to reach as low as the 2nd and as high as the 24th. The fundamental pitch is typically around a G below middle C, and this affects the range of partials which may be reached, with higher partials being more easily reached on lower notes, and vice versa.

An illustration of the harmonic series in musical notation. The numbers above the harmonic indicate the number of cents difference from equal temperament (rounded to the nearest cent). Blue notes are flat and red notes are sharp.

The Tuvan throat singing is similar, to a certain extent, to another ancient form of vocal polyphony that is practiced by the Sardinians, whose singing is known as cantu a tenore.

Khorekteer refers to the “chest voice”. This is the voice that throat singers use when using khomeii, kargyraa, or any other harmonic-inducing style. The term can also be used to refer to all styles of Tuvan throat singing, much like khoomeii. It can also refer to the feeling of chest resonance or pressure that one experiences when throat singing. Khorekteer is often used as a launching pad into the khoomei, sygyt, or kargyraa styles of throat singing.

The most popular style of Tuvan throat singing is known as Khoomei (in Cyrillic: Хөөмей). Khoomei is traditionally a softer sounding style, with the fundamental (or drone) usually in the low-mid to midrange of the singer’s normal voice. In this style, usually 2 or 3 harmonics can be heard between one and two octaves above the fundamental. In Khoomei, the abdomen is fairly relaxed, and there is less tension on the larynx than in other styles. Pitch is manipulated through a combination of movements of the lips, throat, tongue or jaw.

Singing in this style gives the impression of wind swirling among rocks.[7]

The term Khoomei is also used as a generic term to designate all throat singing techniques in this region.

Sygyt (in Cyrillic: Сыгыт), literally ‘whistling’, has a midrange fundamental and is characterized by strong, flute-like or rather piercing harmonics, reminiscent of whistling. Also described as an imitation of the gentle breezes of summer, the songs of birds, the ideal sound for the harmonics is termed “Чистый звук”, which is Russian for “clear sound”.

To perform Sygyt, the tongue rises and seals around the gums, just behind the teeth. A small hole is left back behind the molars, either on the left or right side. The sound is then directed between the teeth to the front of the mouth. The lips form a bell-like shape, usually with an “ee” vowel, and the sound is directed through this small opening. Pitch is manipulated exactly the same way as in khoomei style.[8]

The more deep sounding style of throat singing is known as Kargyraa (in Cyrillic: Каргыраа). Kargyraa has a deep, almost growling sound to it and is technically related to Tibetan Buddhist chantand has some similarities with vocal fry. It uses both the vocal and the vestibular folds (also known as “false vocal chords”) simultaneously, creating two connected sources of sound.

By constricting the larynx, the vestibular folds can be brought together (adducted) and, under certain conditions, vibrate. It can produce an undertone exactly half the frequency of the fundamental produced by the vocal folds. Therefore, for each second vibration of the vocal folds, the vestibular fold will complete a whole vibration cycle. While the larynx generates such rich sound, the mouth cavity may be shaped, just like in the manipulation of vowels, to select some particular harmonics, resulting in a sound that may be perceived as having different pitches simultaneously.

This vocal mechanism has been only recently elucidated and shown to be similar to the chant practiced in Tibet by the Gyuto monastery and other Buddhist orders.[9][10]

There are two types of Kargyraa: Dag (mountain) and Xovu (steppe). The Dag style is deeper and has more nasal effects, while Xovu is raspier and sung at a higher pitch with more throat tension and less chest resonance.[11][12] There are also the distinctive kargyraa styles of Vladimir Oidupaa and Albert Kuvezin, the latter also bearing the name kanzat. This is sometimes described as the howling winds of winter or the plaintive cries of a mother camel after losing her calf.

Effects and other styles 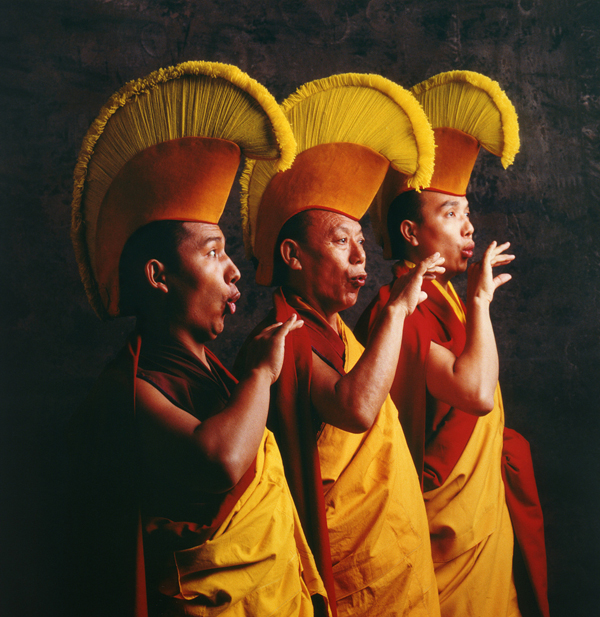 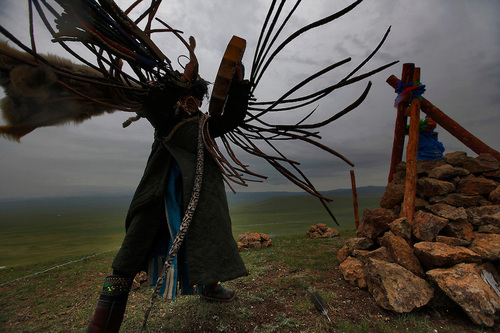 With this Dao, Overtone Singing is made easy by Natascha Nikeprelevic. A true disciple of Michael Vetter, Natascha revealed in this documentary excerpt the four secret routes to the world of overtones: U – O – A; U – Yu – I; O – er – I; and A – a – ei – I. Yes, with this method everyone can enjoy his/her rich overtones! (above)

Performer Christian Zehnder expose his singing to X-Rays. Image made with the Dept. of Radiology at the CHUV Lausanne. (above)