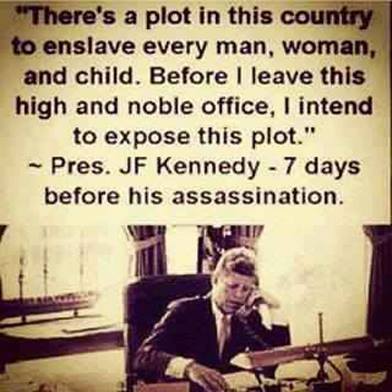 Folks, It has been some time since something has impressed me as greatly as this new film by Francis Richard Conolly.  JFK to 911 (below) is absolutely INCREDIBLE.    I am utterly blown away by the scope, insight, and revelations this investigator has managed to harness.
I am as stunned as I was 8 years ago when I first saw Zeitgeist.   Although, as time has passed, we’ve been able to pick apart Zeitgeist and expose it’s mis/disinfo.   Nevertheless, it has awakened MANY.
That said, I will say the same about the video I am sharing here.  I’m slightly disappointed by a couple aspects, but generally praise it.  The first head scratcher to me is the film maker’s obvious lack understanding of the Holocaust and the propaganda birthed by that event.  But I’m not going to go into that right now.   It’s also curious why he never mentions anything about Zionism?  Nor the Federal Bank?  Especially in relation to Kennedy who, like Lincoln before him, tried to End the Fed.  Which many claim was  another nail in his coffin.  Again, we can save that discussion for later because there is PLENTY to eat on the table already.  Finally, the creator seemingly paints Kennedy a little more saintly than he should have.  Besides his personal foibles, it’s abundantly clear JFK was acting for the greater good.  It appears he really did want to try to rid the world of the robber barons, thugs, murderers, mafia, and pirates who CONTINUE to run this planet today.  (And are running it into the ground!)  I wouldn’t go so far as to say this film is pushing disinfo, per se.  But we’ll see.  Perhaps Conolly simply bit off enough to chew with this massive undertaking and couldn’t possibly have nailed every aspect.   We’ll know for sure as this documentary ages.
In the end, this documentary is a simple powerful tool to get people up to speed who are unfamiliar with these concepts.  We can sort them out with the finer details later.
One thing for sure is:
THIS IS A MUST SEE VIDEO FOR EVERY MAN WOMAN AND CHILD ON PLANET EARTH.  PERIOD.
In one fell swoop, it explains sooo many unanswered questions about some of mankind’s most curious historical chapters.  It ties together and explains how countless disparate forces fueled the trajectory of Western civilization from ancient Rome to today.  It blows things like the JFK assassination, faked wars, fake religions, and false flags WIDE OPEN.
I swear, I will be incredulous if ANYONE can watch this and still doubt that America, and most of the world has been high jacked by the New World Order.  Whomever can not wrap their heads around that after seeing this should be deemed of questionable cognitive ability.
A final note.  The movie makes no mention of these families either.   I find it slightly odd that all but Medici are left out.But whatever.  The meat of this film is enough to think about for a while.

the 10 Roman families whose top men sit on the Jesuit Council:

And here is the list of Nobility, the REAL Zoroastrian Bloodlines of the Illuminati.

If you have not yet seen JFK’s famous speech about secret societies and shadow governments, watch it first.  It’s short and succinct.  It perfectly ties in to what is revealed in the following film.
PLEASE.  DO YOURSELF AND YOUR LOVED ONES A FAVOR.  WATCH THIS FILM ALL THE WAY THROUGH.  I PROMISE, YOU WILL NOT REGRET IT.  SPREAD IT LIKE WILDFIRE.
It’s 3 1/2 hours long, but I assure you, it will not waste your time.  Watch it while you exercise.  Watch it in parts.  Do whatever you have to do to finish it.  After the first 20 minutes it will surely hook you like a great novel.  You won’t be bored.
Enjoy, and spread the word.

I will also add, the information presented in this video confirms my own research, which I’ve been conducting for 10 years now.  As far as I’m concerned, he’s not talking out of his arse.  My own research corroborates what he claims in many of the examples.  For further legitimization, here is a famous speech by Eisenhower, warning of the exact scenario which is exposed in the video above.

This interview with Ole Dammegard on this same subject matter is GOLD…  He takes the words right out of my mouth.  I’ve had THOUSANDS of conversations with people over the years, trying to explain how this all breaks down.  This is another must see, for anyone fired up after the JFK to 911 film.   EVERYTHING IS CONNECTED. It’s starting to make sense. The puzzle is complete now.  What he says about Tesla, Wilhelm Reich, Viktor Schauberger, & Stanley Meyer etc etc is so spot on!  All things in this world are CONTROLLED-CENTRALIZED-CORRUPTED-HIDDEN-BASTARDIZED- & THIEVED.