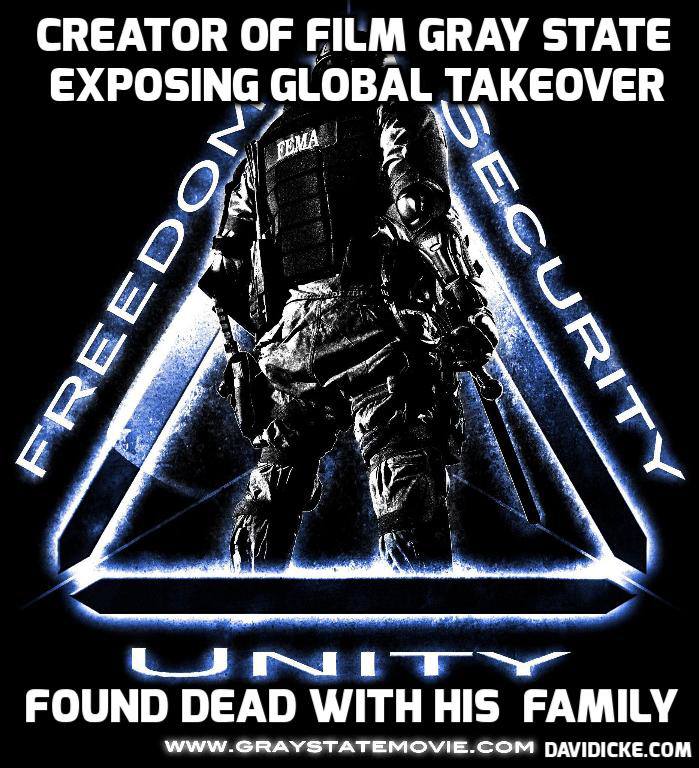 This is an updated article regarding the Gray State situation.  First, I’ll provide a little background and quick recap of what has been happening.  If you’re already familiar with this story, scroll to the bottom to see the FULL DOCUMENTARY MOVIE.

Basically, the original Hollywood style film by David Crowley about the collapse of America and a martial law style takeover by the New World Order was never completed.  This original concept is very heavy, complete with FEMA camps and executions.

Originally, Crowley and his crew had trouble raising the funding to finish the movie.  So they created an Indie Gogo campaign which funded the epic trailer below.  After realizing it was going to take much longer to raise the millions they needed to see out their original vision, they shifted gears and decided to make a simpler documentary about the reality of what is ACTUALLY happening in America now.   With this documentary film they had hopes of securing the rest of the money needed.

Apparently, after nearly completing the documentary film Gray State: THE RISE, Crowley had finally managed to get an offer for 30 million to finish the film of Gray State, the movie.  This is where things get murky.  Below is why.. . . . . . . . . .

“Gray State Creator/Screenwriter David Crowley, his wife and five-year-old daughter were found dead on Sunday morning in a Minnesota home in what is being called a murder-suicide.

Crowley, 29, his wife Komel, 28 and their five-year-old daughter were found after their next door neighbor Collin Prochnow discovered their bodies and notified the Apple Valley Police.

Prochnow told the Star Tribune that he had simply went over to gather packages from the family’s front porch when he looked inside and noticed the bodies and the family dog in the house.

Crowley was the screenwriter for a controversial FEMA camp movie titled Gray State. The film depicts what Crowley envisioned happening following an economic collapse and breakdown of society in America. Watch the trailer below.”

Here’s a quote from the creator.  Sorry, this doesn’t sound like someone who is suicidal.

“The past month I’ve been meeting with some LA-based producers, crew, and other industry contacts, and together we are building the team that will combine our passions and talents and belief in Gray State to optimize its message and reach of its exposure. This has been a truly exhilarating experience!

My attorney and I are reviewing the option contract this week, and once that sucker is signed this whole Gray State thing is going to finally, irretrievably, and monstrously take off for the stratosphere – and in such a way that the message will be preserved – and perhaps even continue in sequels, TV series, and video games. Seriously. Talk about taking over the main stream.

This has been my life’s work for nearly 4 years, and it is extremely gratifying to be backed by such a raging horde of super-fans. Thanks for your patience guys. See you at the premiere.”

Check out thirteen minutes of The Gray State: The Rise.  So Close You Can Touch It Now we get to the 2 1/2 hour VERY RAW documentary.  It is unedited but nevertheless, paints an EXTREMELY powerful picture of the dire state of American in it’s final death throes.   What’s sad is, as we head toward full on tyrannical totalitarian dictatorship in this country, the ignorant, lazy, apathetic, cognitively dissonant sheople follow along unwittingly.  Like slow boiling frogs, unaware of their fate.

But I really feel like we’ve still got a fighting chance.  We need to reach a tipping point.  A mass collective awakening.  And it’s documentaries like this, which can really drive the point home to those who are still sleep walking..

Like Zeitgeist and Thrive before it, Gray State is a hard hitting documentary to those who are largely unfamiliar with the concepts it presents.

What’s important are the overarching messages.  They are spot on, and hard hitting. No sane person can watch this and walk away in denial. If they do, they are unsane. More than just a sheople. It’s more than denial. More than cognitive dissonance. More than apathetic. Straight up nuts…

That said, I’ve got some issues with it.  Like the Americentrism. The somewhat myopic view at times. The “going along with terrorism” as if it were a real thing.  The 911 and Boston Bombing wash over. Could the film makers be that naive? I don’t think so. Perhaps these issues are skirted to try to keep those subjects out of the cross hairs. Ultimately, those aren’t the important things. In the end, they are side notes/stepping stones to the End Game agenda. The film carefully paints simple brush strokes which hint at the New World Order agenda without going too deep. Which is maybe a good thing. It’s actually quite simplified and easily digestible.  Perfect for mass consumption.

All things considered, there are a few other bits that bother me.

There are subtle oddities. The main film makers names are Crowley and Mason? Hmmmm.  There is the typical triangle and All Seeing Eye feature every time someones name is listed.  Again. Hmmm. But, whatever. Could just be a referential thing.

Most of the people featured in this film are on the questionable/possible shills/disinfo/gatekeeper fence. Eh. That still doesn’t detract from the powerful messages it puts forth.

Is this whole thing a big psyop? Are TPTB now ready to drop the economy and this is the “showing what’s coming in plain sight” thing? Is it meant to bait Americans to go rogue? So TPTB can claim they need to “put down an uprising?” (Although to the films credit, at the end, they say the solution is a peaceful one)

Here is another analysis by a colleague of mine which I think merits inclusion.

“Good assessment and questions, quite a few of them I had too.  The psyop thing, social conditioning and PR stunt weigh heavy, to the point where you could be tempted to ask is the whole thing a hoax? I’m not sure when this little docu has been put together, and if and how and who could earn from it, but the timing’s perfect. Skirting around the subject and naming names seems to me to be a self preservation tool used by quite a few truthers, so that’s a possibility too. The death of Crowley could be deterrent enough to scare them into not finishing the project. It’s typical, something like this will get everyone on edge and maybe that’s the point, provoking the desired response. With the “awakening” going as it is, the western authorities seem to be hyping up the propaganda, following the expected strategic control plan. So it all looks like they’re on the ropes, panicking. Makes perfect sense. The real worry is, they’re building up the hype right now while they’ve still got the majority behind them. As you say, strategically, putting down the dissenters will be backed and justified in the eyes of the majority. Sorry but it seems we’ve all got more questions than answers. Just another point, I read in one of the newspaper reports… A neighbour said “Crowley talked about he’d found a niche to exploit.” Could this be more social conditioning to perpetuate “the conspiracy nut” attitude? Or are we all being played like a bad fiddle? Suppose we’ll just have to keep on keepin’ on and see what happens over the next couple of weeks.”

Here is an AMAZING short documentary about the FAKE beheadings we’ve been seeing in the Middle East.  It not only breaks down who is behind them, but how no one is actually dying at the hands of the “blade wielders.”   This is 100% propaganda.  Just like how ISIS is a 100% CIA creation.   The new boogyman.  This movie hints at why the U.S. is currently becoming militarized (IE: impending financial collapse) and points toward why a war in the Middle East is so important to the powers that be.