With a built-in, cloud connected, “always on” microphone, the Echo can listen for your voice “from across the room.”

It’s a personal assistant in a tube!

But let’s be clear here on what this thing is beyond that — or what it will be.

Amazon is not in the business of telling you whether or not it will rain tomorrow.

Nor is it in the business of waking you up in the morning.

Nor is it in the business of teaching you about dead presidents.

Amazon is in the business of selling you things — and that is why Echo exists.

For now, Echo’s shopping-centric functionality is limited to helping you add things to your shopping list.

Need some pickles? Cool. Just say “Alexa, add pickles to my shopping list.” (Note: Echo listens for the word “Alexa” by default. You can pick a different name, it seems.) It won’t order them for you yet. It’ll just add them to a list for you to look at later.

But if Echo sees any sort of success, just watch how fast that will change.

One-click purchase becomes no-click purchase. Your entire house (or at least, anything within earshot of Alexa) becomes the impulse-buy candy shelf from the grocery store’s checkout lane.

Is that a bad thing? Nah. Amazon isn’t forcing these things into your home. And as someone who uses Prime every single day, I actually like the idea of being able to shout my stupid desires to my house and have things magically appear on my doorstep.

But just be clear on why Amazon would want to build something like this. Amazon doesn’t want to be a destination anymore; they don’t want to be something you have to go to; they want to be ubiquitous. They want their store “front end” to be floating in the ether all around you, just waiting for you to open your mouth.

The Echo is a bit like the Fire Phone in that regard; it may do some interesting stuff, but its driving force, the beat in its heart, will be to accept your money as efficiently as possible.

Amazon clearly learned its lesson with the way it marketed the Fire Phone (and the $83 million worth of phones they have sitting around). People don’t like to know they’re spending money just to make it easier to spend even more money. But the motivation here hasn’t changed.

Here’s the breakdown from Amazon 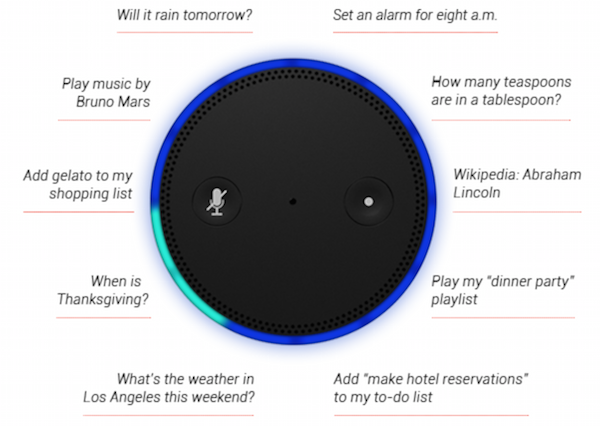 The built-in voice recognition can hear users from across the room, according to Amazon, essentially acting as a Siri-like personal assistant crammed inside a speaker. It listens to user requests using seven microphones and can understand your voice even while playing music. “These sensors use beam-forming technology to hear you from any direction,” reads the product’s page. The speaker also produces 360-degree audio to fill an entire room. It’ll play music from Amazon Prime Music, iHeartRadio, and TuneIn Plus. And it’s fully Bluetooth compatible, making playback from Spotify, Pandora, and other audio apps possible. Companion smartphone apps on Android and Fire OS will launch upon availability to help buyers set up and get started with the speaker, but everyone else (including iOS users) will need to access it via a web app. Amazon tells The Verge that a dedicated iOS app is in the works.

Echo, easily one of Amazon’s most ambitious products to date, is designed to make life easier for users, instantly playing music from your cloud library or telling you the local weather. You can quiz it with general questions and get answers from Wikipedia. Of course, Siri, Google Now, and Cortana can accomplish similar tasks on your smartphone — but Amazon seems to think there’s a place in the living room for something like this (and separate from the TV). Amazon’s assistant has a name too: Alexa. That’s the phrase you’ll use to wake up the always-on speaker. Echo won’t run on batteries, which is another hint that Amazon wants this in your home all the time. 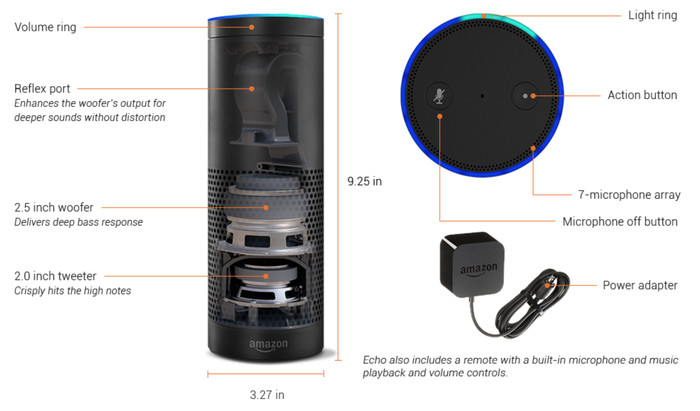